Can the momentum continue in the venture capital industry? Some say things are already slowing. 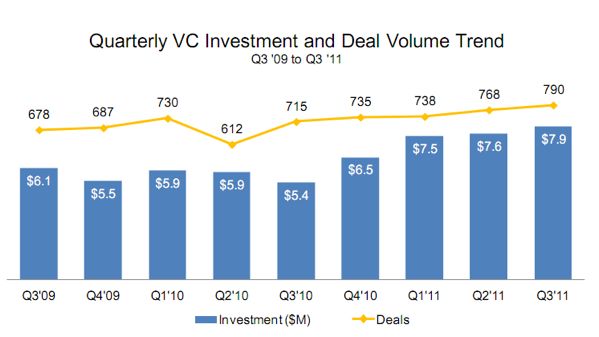 Venture capitalists are pumping massive amounts of capital into startup companies, fueled by the emergence of big shifts in mobile, cloud computing and social networking.

A new report out today from CB Insights indicates that VCs invested $7.9 billion in 790 companies during the third quarter, marking the largest quarterly total so far this year. It was also a healthy 30 percent increase in investment dollars over the same period last year.

“Of course, the looming question after seeing this type of blowout quarter is whether or rather how long this can continue given VCs are having a tough time raising funds. If the final quarter of the year comes in at similar levels, we are looking at a $30B+ year for VCs which could be a decade long high. So at some point, something has to give. But until then, entrepreneurs can enjoy the VCs for however long they choose to make it rain.”

Interestingly, the third quarter is historically the slowest period for venture capital investing given that many investors head out on vacation. 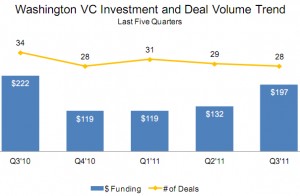 Anecdotally, venture capitalists and service providers who work in the Seattle startup community have told me that things have slowed down in recent weeks. The closing of the IPO window appears to have had a detrimental impact on the enthusiasm many felt in the venture industry at the beginning of the summer. And The Wall Street Journal notes today that the pessimism also is being felt in Silicon Valley, with some startups finding it increasingly difficult to attract new financing.

Two very large venture deals in the Seattle area — a $43 million round for daily deal site Zulily and another $37 million whopper for traffic navigation startup Inrix — boosted investment totals in Washington state at least compared to the previous quarter.

Venture capitalists invested $197 million in 28 deals during the quarter, up from $132 million during the previous quarter. Nonetheless, the numbers were still below the third quarter totals of 2010 when $222 million was invested in the state.

Furthermore, just two percent of all venture capital dollars go to companies based in Washington state.

California remains the overall leader, accounting for some 48 percent of all venture dollars. But one very interesting trend to watch is the rise of New York, which has doubled its share of the venture capital totals in the past year.

The Big Apple’s emergence as a center of entrepreneurial activity was a hot topic at panel discussion I moderated at the WTIA’s TechNW event on Tuesday. (More on that later).

But you can see the state’s rise in this chart, something that leaders of the Seattle tech community need to ponder. 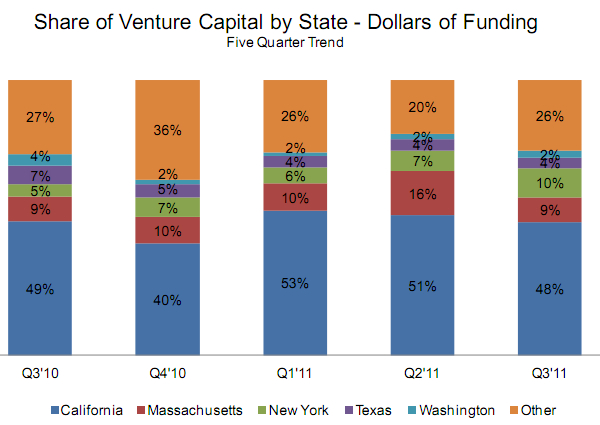