To make beer, you need water. A lot of hot water. 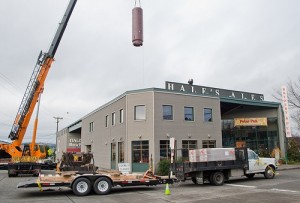 Historically, brewers have used natural gas, electricity or other methods to boil water in their massive brewing tanks.

The system uses solar thermal tubes to transform direct and diffuse sunlight into heat, with Net Zero Impact noting that the technology is more efficient than photovoltaic cells at capturing the sun’s energy. 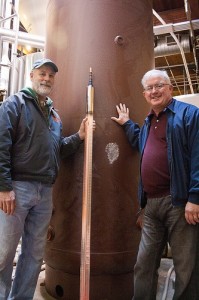 The 480 tubes, developed by Kingspan Solar, collect solar radiation and then transfer it to an insulated manifold that’s used to heat the water.

On Friday, Hale’s lowered a 14-foot tall, 1,200-pound tank through a hole in the roof, with the entire system designed to deliver 3,000 to 4,000 gallons of solar-heated water each day.

Hale’s estimates that the new solar thermal system will save the company about $15,000 annually over its traditional gas powered boiler, with Mike Hale saying it is part of an ongoing effort to create an environmentally-friendly brewery.

The system at Hale’s is the largest installation yet for Net Zero Impact.