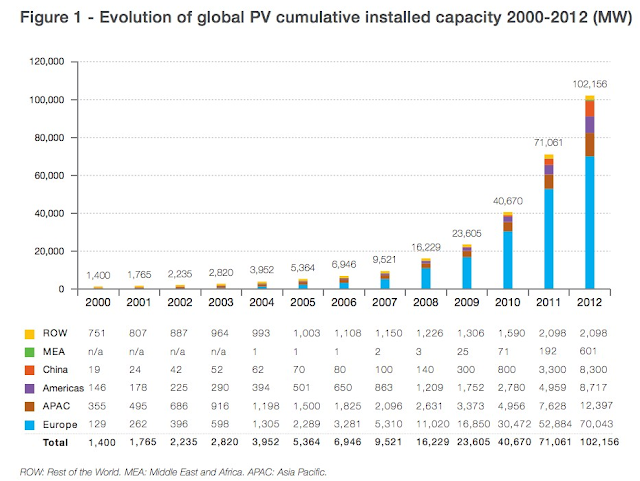 The United States solar photovoltaic (PV) industry has grown tremendously in recent years. In 2012, more than 3,300 MW of solar power were installed throughout the United States, with a record 1,300 MW installed in the last three months of the year alone.

Falling costs for hardware and installation have accelerated this trend, but it has mainly been driven by public policies that generously reward those who install solar systems. The importance of these policies has been illustrated by their adoption in states that have shown the most rapid PV growth. Interestingly, the growth has not been limited to sun-drenched southern and western states with their vast treeless plains. Indeed, there has been significant growth in states further north that are known to be often cool and cloudy and where land for solar development is often in short supply.

Nowhere is the impact of supportive public policies more vivid than in Massachusetts, which has in recent years been transformed into a shining example of explosive PV growth. In 2007, shortly after taking office for the first time, Governor Deval Patrick called for Massachusetts to develop 250 MW of new solar PV capacity by 2017. He led the way to passage of legislation which dramatically expanded the public support for solar PV development.

By the spring of 2013, a full four years earlier than first proposed, the commonwealth reached its 250-MW goal. Recently, Patrick announced a new, dramatically expanded goal of installing 1,600 MW of solar capacity by 2020. If that target is reached, solar will equal roughly 12 percent of the state’s total currently-installed electric generating capacity and, at that time, would be expected to contribute about 4 percent of the state’s annual electricity supply.