Energy benchmarking may not sound like the most important concept in the clean tech dictionary, but it’s helped Seattle identify an energy efficiency path forward to save up to $90 million annually on utility bills.

Seattle’s positive outlook is just another example of the powerful potential for energy benchmarking to cut power use and utility bills – an average of 7% over three years – in a growing number of cities across America. 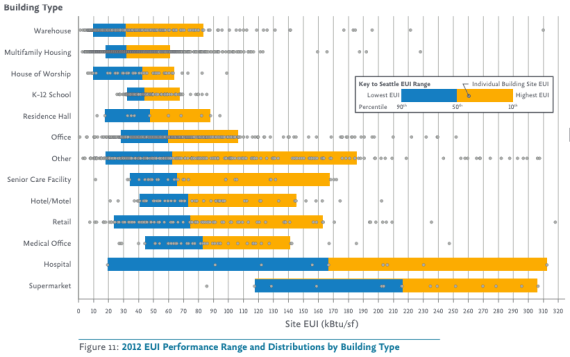 Benchmarking is the act of measuring and reporting the energy or water use in one building and then comparing it over time to an average or specific group of buildings. Nine cities and two states have some form of benchmarking regulation in place, and Seattle boasts a 93% compliance rate – the highest in America.

Owners of a collective 228 million square feet of building space provided their 2012 energy use city in the first year of compliance with Seattle’s 2010 benchmarking ordinance. Government analysts used this data to set performance ranges for 13 different types of buildings.

For the first time, building owners can compare their performance to other offices, hotels, apartment buildings, retail locations, and educational institutions to see if energy efficiency improvements could save them money. For instance, an average Seattle office building has an energy use intensity of 60 kilo British thermal units per square foot (kbtu/sf) annually, while multifamily buildings average 32 kbtu/sf.

Room To Improve, But Also Rights To Brag

And that’s also how Seattle was able to project out potential savings. If all the highest energy users improved efficiency to their building type’s average, the city would save a combined $55 million on annual utility bills while cutting total energy use 25% If those same buildings matched the efficiency of the best-performing buildings in their class, they’d save a whopping $90 million on bills and cut energy use 42%

But while Seattle has room to improve, it’s also worth noting the city’s average building is 18% more efficient than the national median, and 41% of all buildings are efficient enough to apply for the Environmental Protection Agency’s Energy Star certification – an honor 69 buildings have already earned citywide.

One other interesting fact emerged from the analysis and could help building owners target improvements: Office buildings built between 1960 and 1980 used the most energy, not those built before 1950, as some may suspect.

While Seattle was certainly an early adopter, it’s not alone among U.S. cities. Austin, Boston, Chicago, Minneapolis, New York City, Philadelphia, San Francisco, and Washington D.C. all have benchmarking policies in place, helping building owners determine if they’re wasting energy while helping utilities and governments identify the energy efficiency standards and incentives that will work in their market.

For instance, San Francisco’s second annual benchmarking report found municipal buildings cut energy use 3.6% and decreased their carbon footprint from 2011 to 2012, while benchmarking is boosting building values in Washington, D.C. and could cut New York’s emissions up to 15% per year.

The Institute for Market Transformation has estimated 48,000 properties and 4.9 billion square feet of building space will come under benchmarking regulations each year, and a national benchmarking policy would save the same amount of energy as removing 3 million cars from the road each year by 2020.

“Improving building energy efficiency benefits the entire city by lowering energy costs, reducing carbon emissions, and making Seattle an even more attractive place to live and work,” said Jill Simmons, Seattle’s Sustainability and Environment Director. Sounds like an outcome most mayors would love to see in their cities, too.