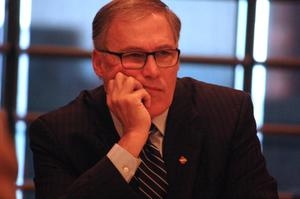 After receiving a new report Monday,Gov. Jay Inslee is a step closer to unveiling his master plan to tackle Washington's carbon emissions. That's expected to be in December — roughly in conjunction with his 2015-2017 state budget proposal that will include how potential climate change-related taxes and fees will be recycled back into the state's economy.

In fact, the economic ripple effects and where any tax money might go both appeared to be the biggest concerns of a task force that provided feedback and advice to Inslee on Monday in a 96-page report.