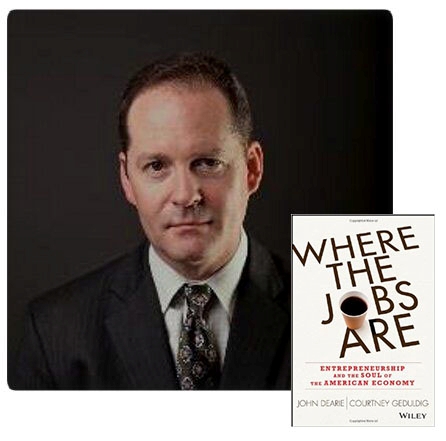 CleanTech Alliance is very excited to hear John Dearie, author of Where the Jobs Are, keynote at this year’s CleanTech Showcase on June 22 in Seattle.

Following the 2008 economic downturn, millions of Americans were left unemployed or underemployed for extended periods of time. Having learned that new businesses — “start-ups” — are the true engine of job creation, and that start-up rates have declined in recent years, John and his co-author Courtney Geduldig traveled the country, conducting roundtables with more than 200 entrepreneurs in 12 cities, including Seattle, to find answers.

For those that haven’t read the book yet, how did you identify that startups are the true job creation engine in the U.S. economy?

In the spring of 2011 — two years after the economic “recovery” officially began, two years after the $815 billion fiscal stimulus, and after two rounds of “quantitative easing” and 28 months of 0% interest rates courtesy the Federal Reserve — economic growth remained anemic and unemployment was still north of 9%, with 24 million Americans still either out of work or underemployed. And Washington D.C. seemed at a loss for what to do next. Policymakers were in need of some new ideas and I suggested that the Financial Services Forum, where I’m the policy director, should try to come up with some new policy options.

A colleague of mine and I started doing our homework and soon afterward came across research that was quite new at the time, having been done at the Census Bureau in 2009 and at the Kauffman Foundation in 2010. The work demonstrated that new businesses — “start-ups” — had been responsible for virtually all net new job creation between 1978 and 2005.

That finding immediately caught our attention because our understanding — and D.C.’s — has always been that small businesses are the engine of job creation. The fact that new businesses are the true engine of job creation meant that Washington D.C.’s attention has been wrongly focused. We subsequently learned that rates of new business formation had fallen significantly in recent years, and knew that we were on to something important.

You talked to a lot of entrepreneurs in Seattle. What’s your take on our specific recovery path?

This recovery has been the weakest post-recession recovery since World War II. The economy has grown at about 2% annually for six years now, in contrast to the 3.4% annual growth the economy averaged between World War II and the Great Recession. In an economy the size of ours, percentage points matter. Had the economy grown at 3.4% since 2009 rather than 2%, GDP last year alone would have been almost $1 trillion greater.

The big question is: Why aren’t we growing faster? I and a number of others far smarter than me — like Robert Litan at the Brookings Institution and Edward Prescott, the 2004 Nobel Prize recipient — are convinced that our slow growth is due in large part to a substantial decline in new business formation over the past 30 years.

That decline isn’t happening in every city — in Seattle, for example, entrepreneurship is thriving. But Litan’s research shows that the decline is happening in all 50 states and in every industry sector, including high tech. The connection between start-ups and growth is innovation. Economists have understood for a long time that most major innovation comes from new businesses, that innovation drives productivity growth — producing more with less — which propels economic growth. The decline in start-ups means America’s engine of growth and job creation is breaking down. That’s nothing less than a national emergency.

Did you glean anything specific about the cleantech market sector?

The cleantech sector is booming as you know — but my guess is that cleantech companies, and start-ups in particular, encounter many or most of the same difficulties that all start-ups encounter regardless of the sector. Challenges like finding qualified talent, either skilled Americans or foreign-born talent, access to capital, regulatory burden and uncertainty, tax burden and uncertainty, and an economy still not growing at its full potential.

Everyone seems skittish after 2008. Our economy is in recovery mode, but a lot of investors are asking if we’re in another bubble. What are your thoughts on that?

The worries about a bubble stem principally from the apparent disconnect between an economy growing and creating jobs at a sluggish pace, and stock and bond markets — and the valuations for some new companies going public — at or near record highs. As you know, the Federal Reserve has kept short-term interest rates at 0% for six and a half years, which has created lots of liquidity and, in the opinion of many observers, has distorted markets and rational risk-assessment, and pushed up asset prices artificially. Others disagree, arguing that the world is on the threshold of a new era of game-changing technological progress and that market valuations reflect that potential.

Are we in a bubble? Hard to know for sure. Bubbles are hard to recognize, except in the rear-view mirror.

Is the U.S. making any progress on your policy recommendations?

Some progress, but much more to do. The Jobs Act of 2012, which legalized crowdfunding, for example, was a great step forward in enhancing start-ups’ access to capital. But the SEC still hasn’t finalized the implementing regulations, so we’re still waiting. Plus, there’s more work to be done in improving access to capital, like incentivizing angel capital formation and commitment and improving start-ups’ access to lending by banks, which has always been tough given how risky start-ups are.

Meanwhile, Washington D.C. seems all but incapable of addressing two issues vital to enhancing new business formation, survival, and growth — immigration reform and tax reform. Despite consensus in D.C. that reform on both fronts is urgently needed, there just isn’t the political will so far to put aside differences and compromise. Other issues important to promoting entrepreneurship include regulatory relief and simplification, and education reform to ensure we have a truly 21st century workforce. Both are very complex and contentious issues as well, and I see no meaningful progress on either in the near future. So we’ve got work to do.

What’s the one thing federal and state policymakers could do to make the biggest economic impact in the shortest amount of time?

Start-ups are very risky – a third fail by their second year, half by their fifth. Many start-ups should fail, but too many good business ideas are failing or struggling for bad reasons.

Two of the problems we heard about over and over again at our roundtables were regulatory burden and uncertainty, and tax burden and uncertainty. Entrepreneurs told us they spend far too much time on regulatory and tax compliance. And tax payments rob start-ups of precious operating capital. So, one recommendation would be to create a new preferential tax and regulatory framework for new businesses for the critical first five years of their existence — a flat 5% income tax, combined with a “light touch” regulatory framework comprised of only the most essential product safety, worker protection, and environmental protection regulations. Such a framework would allow start-ups to keep nearly all of the little money they might be making in their first five years, provide dramatic regulatory relief, and provide the certainty entrepreneurs need to focus on building their business. Think of it as an on-ramp to viability. After five years, they have to sink or swim.

Have you seen any policies emerge in foreign countries that the U.S. (or Washington State) could/should replicate?

Countries all over the world — including China, Germany, Canada, Australia, and Chile — have in recent years overhauled their own immigration policies to attract and retain the world’s best talent. They understand that competing and winning in the 21st century is all about innovation and talent.

Meanwhile, United States immigration policies in many ways actively deter foreign-born talent from coming to America to work or start a business. That must change, and fast, or the next Intel, Google, EBay, Yahoo, or Tesla — all great American companies launched by foreign-born entrepreneurs — will be started somewhere else.

How can the CleanTech Alliance, as a state-based trade association, help support entrepreneurs and job growth?

Get politically active and stay active. The innovation and entrepreneurial sectors have historically not been active, preferring to keep D.C. and its problems and bickering as far away as possible. That’s not an option any more. Entrepreneurship, broadly speaking, is in decline and turning that decline around requires policy changes. Help your members of Congress understand how important new business formation is to innovation, economic growth, and job creation. Explain that new businesses are fundamentally different from existing businesses. And help educate them about start-ups’ unique policy needs.

A great way to move the needle on all those fronts is to support a new organization being launched in D.C. called the Center for American Entrepreneurship. More on that in a bit.

What do you hope folks take away from your CleanTech Showcase keynote presentation?

The book was very well received. What’s next for John Dearie?

As I was writing the book, it occurred to me that very few policymakers in D.C. understand, or are even aware of, the unique nature, importance, and needs of start-ups. There are a few, like Senators Mark Warner (D-VA), Jerry Moran (R-KS), Marco Rubio (R-FL), and Chirs Coons (D-DE), but we need many more. It further occurred to me that a major reason for that knowledge gap is that there is currently no organization on the ground in Washington D.C. dedicated to engaging with and educating policymakers about the importance and needs of entrepreneurs and the start-ups they launch.

I’m very excited to say that I and Bob Litan, the economist I mentioned who has done much of the research connecting start-ups to the broader economy and documenting the alarming decline in entrepreneurship rates — have decided to change that. We’re launching a new organization called the Center for American Entrepreneurship (CAE). We’ve put together a board of eighteen fantastic folks — noted academics like Bob and Ed Prescott, people who work with entrepreneurs like Rebecca Lovell here in Seattle and similar folks in Chicago, Atlanta, New Orleans, Austin and elsewhere, and a number of active entrepreneurs. CAE’s mission is to work with policymakers in D.C. and around the country in pursuit of a policy agenda that will improve prospects for new business formation, survival, and growth.