While many renewable energy advocates are harnessing the power of the sun, wind and water, Susan Petty prefers to focus on an even more prevalent source – one right under our feet in the Earth’s layers.

“Geothermal is a source of energy that is pretty much everywhere and available anytime, but it’s something we’re really neglecting” said Petty, Co-Founder of AltaRock Energy and second speaker of the CleanTech Alliance Breakfast Speaker Series sponsored by Perkins Coie.

Petty founded AltaRock in 2007 to develop technology that would expand the use of geothermal energy outside traditional areas, and to reduce costs and risks associated with the technique. She brought 40 years of experience in geothermal research, policy and technology development to start the company that is changing possibilities in the field.

Geothermal energy is drawn from heat in the Earth’s layers that can either be used directly as a heat source, or transferred into electricity. Traditional methods focus on finding natural hydrothermal systems – such as hot springs – to harness the natural process of heating and cooling water. Today geothermal is mostly used for electricity, and the U.S. is the largest of that electricity.

Petty sees more potential for geothermal, including use as a baseload energy source, a consistent renewable source that could replace aging coal mines, and energy storage for intermittent renewables such as wind and solar.

“As more wind and solar plants come online we need more options for energy storage and balancing,” Petty said. “Geothermal reservoirs can store energy from solar and wind underground as hot water which can then be converted into steam at peak demand times.”

Current barriers to putting geothermal to use for these purposes, however, are high risks associated with exploration for hydrothermal systems and the limited areas where the systems exist. AltaRock is addressing both of those challenges by continuing development of the enhanced geothermal systems (EGS) technique, which uses drilling to collect energy at more locations with less risk. 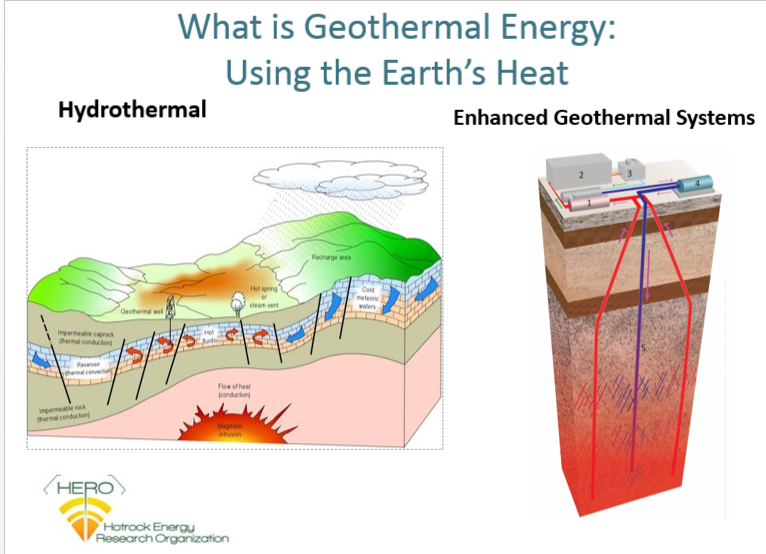 “We can drill down anywhere on earth to a layer of rock that is hot enough to make electricity,” Petty said, “And we’ve found the west coast has a lot of potential areas where the heat is still pretty close to the surface.”

In a similar practice that is used for collecting natural gas, the EGS method involves drilling into the earth’s surface, making fractures in hot rock, and injecting cold water that is transferred into heat and steam. Currently AltaRock is developing this approach in three locations – Nevada, Oregon and the Geysers geothermal field in California. High costs are still prohibitive to full adoption of this method, but Petty had recommendations to help bring those costs down. One is building out geothermal on the sites of phased-out coal plants, which could save on infrastructure costs and provide new job opportunities for coal power plant and mine workers. In addition, incorporating geothermal into land-intensive renewable sites such as wind and solar could lower costs and provide a storage option for those intermittent sources.

“As more facilities of wind and solar have gone online, costs have dropped dramatically for those renewables,” Petty said. “We haven’t seen that yet for geothermal, but we could if we start to employ these new technologies with large scale projects.”

Looking forward, AltaRock is also exploring what areas of Washington would be favorable to geothermal power. Petty also launched a non-profit, called Hot Rock Energy Research Organization (HERO), that focuses on the research side of the continued technology development needed to help geothermal energy penetrate the renewable market.

Watch the video of her full talk and Q&A below, and keep up with AltaRock and HERO’s progress at altarockenergy.com and hotrockhero.org.

Make sure to reserve your seat at the next breakfast, which features Ana Mari Cauce, University of Washington President. You can also still buy a series pass for the remaining six breakfasts! The series is also available through webcast for our members throughout the northwest. Follow the conversation on Twitter using #CleanTechBacon.