What are some of the key findings for the Pacific Northwest?

They add up to bad news for Oregon, Washington and Idaho: More extreme weather creating more landslides, flooding, drought and wildfires. The report notes that the region’s way of life is connected to the environment and natural resources and that the impacts are profound. The Northwest’s economy depends in large part on natural resources in sectors like forestry, fisheries, agriculture and outdoor recreation. Climate change threatens all of them. 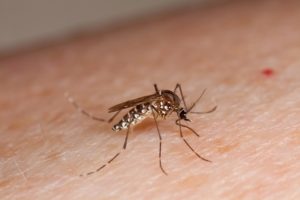 The mosquito Aedes aegypti can spread several diseases as it travels from person to person. Only the females feed on blood. CREDIT: STEPHEN AUSMUS/USDA/FLICKR

Winter recreation, for example, would be hit hard; the report predicts a lack of snow from climate change could cut all snow-based recreation revenue by 70 percent. And with spring starting earlier, crops could start blooming before insects come around to pollinate them.

Then there are the things we might not think about as related to climate change, like our health. Warmer temperatures bring more mosquitoes, and as a result we’re going to see more mosquitoes carrying the West Nile virus. That means more people getting infected and even dying from that virus.

The report says we’re already seeing some of these effects in the Northwest. What kinds of climate change impacts are we seeing?

The report zeroes in on a recent year when we saw a lot of them: 2015, a year of severe drought for the Northwest. The report presents that year as a preview of our future with climate change. Temperatures were several degrees above normal with record low snowpack, rampant wildfires and smoky skies, and huge agricultural losses.

Toxins from harmful algal blooms closed fisheries along the coast in 2015 and we saw salmon die-offs because of the warm water temperatures in rivers and streams.