Week five was an unusual one here in Olympia with Monday’s winter storm causing leadership to cancel all committee meetings and ultimately shut down the capitol for a brief 24 hours—a very rare occurrence during the legislative session. This delay resulted in the harried rescheduling of countless bills and jam-packed hearings in the following days as we are now just one week away from the deadline for bills to be voted out of their initial policy committee and two weeks away from the last day to pass fiscal committees (for legislation that has a fiscal impact).

Taking center stage this week was legislation that would apply parts of the Public Records Act to members of the legislature. This comes in contrast to the event that took place last session in which legislation effectively exempting legislators from the PRA was shuttled through both chambers in a matter of days, then ultimately vetoed by the Governor after thousands of citizens caught wind of the policy and voiced their indignation. Similarly, a bill was heard in committee that would prevent local jurisdictions from imposing taxes on employees; this was in response to the Seattle City Council’s attempt to impose a Head Tax over the summer, which was ultimately repealed less than a month later after making headlines for significant opposition.

At this point there is still little momentum around budget and tax proposals. We expect more activity around the three budget proposals—operating, capital, and transportation—after the upcoming committee cutoffs. 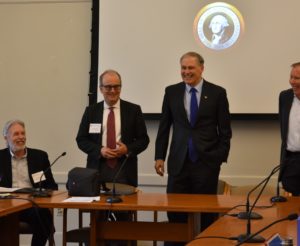 Governor’s Inslee’s 100% Clean bill, HB 1211 and SB 5116 continue to take center stage as the primary carbon-legislation vessel. Both versions were heard in their respective fiscal committees this week, HB 1211 incurring lively conversation on Thursday as members dove into the long-term costs to consumers of the policy for the first time. They are scheduled for votes out of those committees next week. The tangential Republican-sponsored, cost-reduction legislation, HB 1226, was also heard and is scheduled for executive session next week. It was voted out of its policy committee unanimously.

The other carbon-related proposals have not gained any notable traction, however Sen. Carlyle did host a stakeholder workgroup on his Cap and Trade bill early in the week in which he voiced a strong desire to have it accompany the 100% Clean legislation and directed the EITE’s to submit comments on the draft released last week. We expect to see the bill officially introduced sometime next week. Rep. Shewmake’s carbon tax legislation has not been introduced yet and does not appear to have any momentum around it.

A few other bills of interest were heard this week including HB 1832, legislation regarding electrification of pubic vehicles, SB 5280 concerning community solar gardens, and a commercial property assessed clean energy and resiliency (C-PACER) bill.