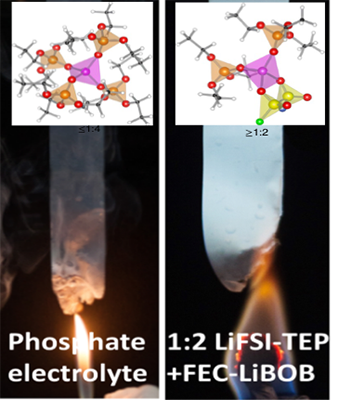 Schematic images showing the self-assembled evolution of POSS-(SS-PEG)8 with the concentration of 1 mg/mL in pH 12 aqueous solutions for various times. Along with the initiation of morphology transition in alkaline solutions, multifarious morphologies like uniform micelles, cylinders, vesicles, worm-like micelles, hollow spheres, and elliptic nanoparticles are generated in sequence. The flammability of phosphate electrolyte (left) drops at high salt-to-solvent molar ratio (right) caused by the change in Li ion solvation structure (insets). Enlarge Image.

While rechargeable lithium-ion (Li-ion) batteries are widely used in consumer electronics, electric vehicles, and many other applications, their use is still limited by constraints on their energy capacity and stability. In some well-publicized recent incidents, Li-ion batteries in aircraft and mobile phones have caught fire, amplifying concerns about their safety.

Recognizing these challenges, a research team led by Pacific Northwest National Laboratory’s Jun Liu and Maria Sushko, as well as colleagues at China’s Wuhan University, discovered how to improve battery safety and stability by altering the salt-to-solvent ratio in battery electrolytes, without compromising battery performance.

A paper detailing the team’s research, Non-flammable electrolytes with high salt-to-solvent ratios for Li-ion and Li-metal batteries, was recently published in Nature Energy.

In the past few years, researchers have pursued several promising strategies in efforts to mitigate safety concerns surrounding conventional Li-ion battery electrolytes, including the use of voltage- and temperature-sensitive separators, overcharge-protection additives, materials with positive temperature coefficients, and redox shuttle additives. Researchers have also explored solid-state electrolytes as safer alternatives to those based on liquid electrolytes. Despite these alternative lines of inquiry, the development of fire retardants or non-flammable electrolytes is still considered the most promising approach to achieving battery stability and safety.

The approach that Liu’s team pursued is fundamentally different than previous efforts. It involves the pairing of conventional electrolyte chemistry with the adjustment of salt-to-solvent ratios to achieve low electrolyte reactivity and high efficiency of Li migration between battery electrodes. The key finding from this work is that the electrolyte structure itself changes when the salt-to-solvent ratio reaches a specific threshold, which, in turn, changes the mechanism of Li migration and the reactivity of the electrolyte.

As Sushko explains, “we discovered that the mechanism of Li conductivity in Li-ion battery electrolytes changes with Li salt-to-solvent ratio. At low Li concentration, each Li ion is fully solvated. In contrast, when the salt-to-solvent ratio increases, the number of available solvent molecules is insufficient to fully solvate each Li ion. At that stage, some solvent molecules are shared between neighboring Li ions.” When this ratio is high enough and many solvent molecules are shared in this fashion, researchers observed significant reductions in electrolyte reactivity.

At high salt-to-solvent ratios Li also moves differently within the electrolyte. Li hops from one spot in concentrated electrolyte to another instead of slowly drifting around. This new mechanism for Li migration enhances the Coulomb efficiency of the battery.

The fundamental mechanism for electrolyte stabilization that Liu’s team discovered points the way to development of new electrolyte chemistries compatible with a wider range of battery electrode materials.