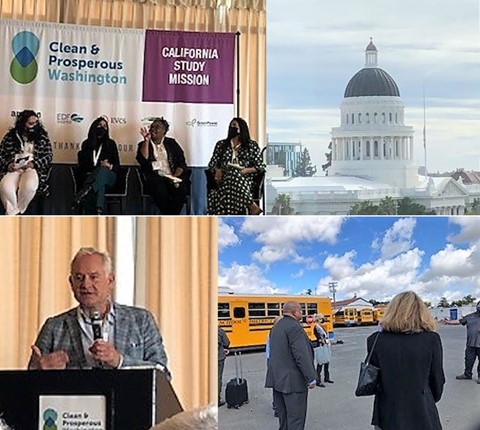 On October 21 and 22, 2021, the CleanTech Alliance joined a delegation of Washington State officials, legislators, and business leaders on a two-day study trip to Sacramento, California.

During the comprehensive conference, CleanTech Alliance staff heard from the California Air Resources Board (CARB) about the successes and lessons learned from its Cap, Trade, and Invest program (AB32), launched in 2006.

The first panel titled California Climate Policy featured CARB Chair Liane Randolph, Rajinder Sahota, and Executive Director of CARB Richard Corey. In addition to providing a brief summary of the history of AB32, the speakers also stressed that even though the climate crisis is urgent, organizations still need to take the time to get things right and to learn from their mistakes.

During the lunchtime keynote, Washington State Senator Reuven Carlyle spoke briefly about the need for climate action on all levels and the importance of listening deeply and sharing openly.

The afternoon sessions split into two tracks: attendees had the opportunity to either learn about California’s climate change efforts and decarbonizing the transportation system or to listen to an in-depth session about the implementation of the cap-and-trade system.

Both tracks reconvened for the final session of Day 1, a powerful panel titled “Ensuring Environmental Justice” featuring Rep. Deb Entenman from the Washington State Legislature, Alyssa Macy from the Washington Environmental Council, and Anbreen Afshan and Rajinder Sahota from CARB. The panel was moderated by Paula Sardinas from the Build Back Black Alliance. Over the course of the hour, the women shared deeply personal stories about their lived experiences regarding climate change and touched on topics ranging from intersectionality and equitable engagement to health disparities in overburdened communities and treaty rights.

The first day of the conference concluded with a riverfront dinner at the Rio City Café, which provided ample opportunity for networking with other attendees.

Day 2 of the conference started off with a brief session about the Yurok Tribe and how it has been able to thrive under the cap-and-trade program. In addition to starting its own brewing company, the Yurok Tribe also offers guided canoe tours and has purchased back its traditional  land to start sustainable farming projects.

The next session, “Entrepreneurs in Action,” highlighted six entrepreneurs that had benefited from the investment of the state’s cap-and-trade fund.

Salim Youssefzadeh from WattEV talked about his company’s unique model of covering both the insurance and maintenance cost of WattEV’s electric trucks as a service. Gustavo Occhiuzzo from Green Commuter discussed the lack of widespread charging infrastructure in California causing 20% of EV adopters to revert to gas and the need for developing more charging infrastructure in low-income neighborhoods. Meanwhile, Bob Houston from Houston Magnani and Associates talked about the unique opportunity that decarbonizing the cement industry presents whereas Victoria Johnson from the Sacramento Housing and Redevelopment Agency spoke about redeveloping the Mirasol Village neighborhood in Sacramento into green, attractive, affordable housing. Michael Boccadoro from Dairy Cares addressed how the dairy digester program resulted in a 29% reduction of methane emissions, making it California’s most successful cap-and-trade program. Lastly, Erick Watkins from Pacific Coast Producers spoke about his company’s revolutionary steam recapture boilers that resulted in a 30% gain in efficiency and a 50% reduction in emissions.

For the final session, attendees had the opportunity to participate in a site tour to  learn more about the projects featured in the Entrepreneurs in Action session.

CleanTech Alliance President and CEO Mel Clark attended tour option #1 to learn about composting through healthy soils and energy efficiency in food processing. Policy and Program Specialist Lindsay McCormick attended tour option #2 to learn about how the Twin Rivers School District converted its diesel school buses into the largest fleet of electric buses in North America. McCormick also toured the Marisol Village affordable housing community to see how the neighborhood is being revitalized and reimagined with rain gardens, recycled materials, and community flower and vegetable gardens.

Overall, the CleanTech Alliance got a lot of value from this conference. Not only did we gain a lot of knowledge about California’s cap, trade, and invest system, but we also made invaluable connections to both state legislators and other Washington business leaders. We hope to stay engaged with the individuals we networked with on the trip and leverage these connections into partnerships for potential grant programs, speakers at upcoming events, and to have a louder megaphone with advocacy issues so that we can ensure that our members’ voices are heard and reflected in legislation.

You can view the conference agenda here and find a list of participants with full bios here.