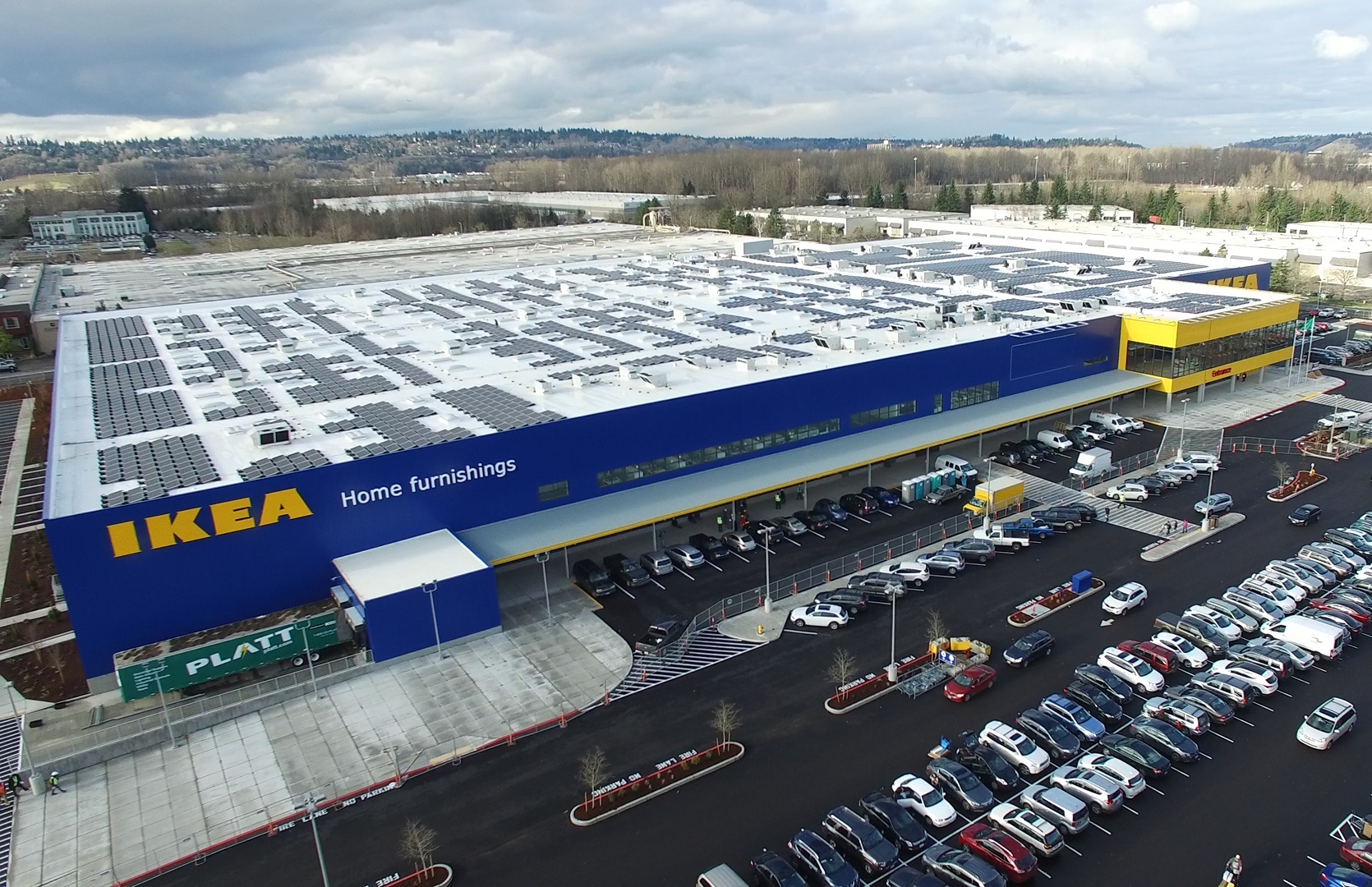 IKEA, the world’s leading home furnishings retailer, today announced that the installation of solar panels is complete atop the relocated Seattle-area store currently under construction in Renton, WA that will open in early Spring 2017. The project is the largest solar rooftop array in the state of Washington.

The store’s 244,000-square-foot solar array consists of a 1.13 MW system, built with 3,268 panels that will produce approximately 1,261,000 kWh of electricity annually for the store, the equivalent of reducing 886 tons of carbon dioxide (CO2) – equal to the emissions of 187 cars or providing electricity for 131 homes yearly (calculating clean energy equivalents at www.epa.gov/energy/greenhouse-gas-equivalencies-calculator).

REC Solar, a national leader in solar installations, designed the store’s solar array, which was installed by Seattle-based A&R Solar. Deacon Corp. is managing the construction of the store, that reflects the unique architectural design for which IKEA stores are known worldwide.

“Installing the solar panels is another exciting and sustainable step in the progress towards opening this relocated Seattle-area IKEA store,” said Diedre Goodchild, store manager. “IKEA strives to create a sustainable life for communities in which we operate, and our new Renton store is adding to this goal with Washington’s largest rooftop solar array.”

This array represents the 45th solar project for IKEA in the U.S., contributing to the IKEA solar presence atop nearly 90% of its U.S. locations, with a total generation goal of more than 40 MW. IKEA owns and operates each of its solar PV energy systems atop its buildings – as opposed to a solar lease or PPA (power purchase agreement) – and globally allocated $2.5 billion to invest in renewable energy through 2020, reinforcing its confidence and investment in solar photovoltaic technology. Consistent with the goal of being energy independent by 2020, IKEA has installed more than 700,000 solar panels on buildings across the world and owns approximately 300 wind turbines, including 104 in the U.S.

Under construction across the 29-acre IKEA parcel from the current Renton store, near State Highway 167, the future 399,000-square-foot new store, including 1,600 parking spaces, will open early Spring 2017. Until then, customers can shop at the existing store. During construction, IKEA is providing additional parking nearby on weekends for customers and shuttling them to the store. Customers can find detailed information about parking directions, shuttle plans and construction updates available at IKEA-USA.com/Seattle and @IKEA_Seattle.

Since its 1943 founding in Sweden, IKEA has offered home furnishings of good design and function at low prices so the majority of people can afford them. There are currently more than 380 IKEA stores in 48 countries, including 43 in the U.S. IKEA has been ranked among “Best Companies to Work For” and, as further investment in its coworkers, has raised its own minimum wage twice in two years. IKEA incorporates sustainability into day-to-day business and supports initiatives that benefit children and the environment.