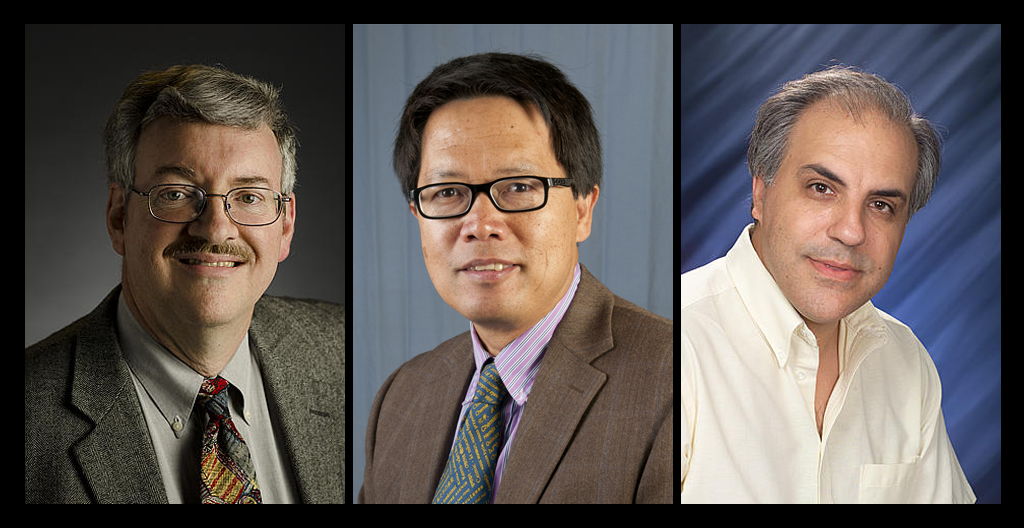 (Richland, WA–July 19, 2018) Three scientists at the Department of Energy’s Pacific Northwest National Laboratory have been elected members of the Washington State Academy of Sciences, along with a former PNNL scientist.

Morris Bullock, Yuehe Lin, and Sotiris Xantheas will join an elite group of scientists and engineers from across the state for their outstanding scientific and technical achievements.   Gary Yang, a former PNNL Laboratory Fellow and now Chief Strategy Officer of UniEnergy Technologies, was also among the group of newly elected members.  Academy members provide their leadership and expertise to help solve issues affecting Washington State, inform public policy-making, and increase the role and visibility of science among the public.  The academy was created in 2005 and, including the class of 2018, consists of 286 members from various academic disciplines and backgrounds. The three new inductees bring PNNL’s total number of staff who are members to 22.

Several PNNL researchers hold leadership positions in WSAS serving on the executive committee, board of directors and topical working groups. Don Baer, a PNNL laboratory fellow serves as the organization’s secretary. Jud Virden, PNNL’s associate laboratory director for energy and environment is a board member. Sue Clark, a Battelle Fellow, who holds a joint appointment at PNNL and Washington State University, is serving a second term on the board.

The 29 new WSAS members elected this year will be inducted at the academy’s 11th annual meeting at the Seattle Museum of Flight on September 13.

Pacific Northwest National Laboratory is the nation’s premier laboratory for scientific discovery in chemistry, earth sciences, and data analytics and for solutions to the nation’s toughest challenges in energy resiliency and national security. Founded in 1965, PNNL is operated by Battelle for the U.S. Department of Energy’s Office of Science. DOE’s Office of Science is the single largest supporter of basic research in the physical sciences in the United States, and is working to address some of the most pressing challenges of our time. For more information, visit PNNL’s News Center.